An Interview with Ms Vi Peterson, International House Chair of Council, on the new ‘Vi and Pete Peterson Scholarship’.

‘Scholarships offer students a unique living and learning environment, one that not all students can afford’. Ms Vi Peterson, the Chair of Council of International House, is not only a fierce advocate of the importance of scholarships in offering students self-development opportunities; she is also a former resident of International House and a recipient of a scholarship herself during her time at the residential college.

Ms Peterson believes in the potential of youth and the utmost importance of scholarships in providing students with opportunities they may not have had access to otherwise. Her alma mater International House, a residential college with the vision of not only providing students with a place to live while studying, but with a place to grow and become global citizens. The House encourages all students to immerse in the culture of the country in which they’re studying, as well as that of all students residing at the college. Through this ‘intermingling’, it helps to prevent the formation of ‘nationality ghettos’, a way in which students can seek comfort in unfamiliar environments; but instead form life-long bonds with people from every inch of the globe. This is an invaluable experience and the college has many scholarships available to ensure that students don’t miss out on these amazing opportunities the House has to offer. Like that of International House’s newest bursary, the Vi and Pete Peterson Scholarship, which is very close to home for Ms Peterson as it can provide students with similar opportunities that were made available to her through her own scholarship.

Upon graduating from the University of Melbourne with a Bachelor of Commerce, and a Graduate Diploma in Corporate Finance from Swinburne, Ms Peterson began her banking career with ANZ, a career that would span 15 years.  She was eventually sent to Vietnam to establish ANZ’s greenfield operations there.  After ANZ, she then served as the Senior Trade Commissioner for Australia in Vietnam, a diplomatic position promoting bilateral trade and investments. During her time in Vietnam, Ms Peterson and her husband Pete Peterson were made startlingly aware of the public health burden caused by accidental injuries in developing countries such as Vietnam.  Ms Peterson has a passion for ‘orphan issues’, those that are often overlooked or do not receive as much public spotlight or attention as others.

While working in Vietnam in the late 1990’s and advocating for child injury prevention there, Ms Peterson and her husband Pete met and introduced businessman and entrepreneur Mr Chuck Feeney and his CEO, Mr Christopher G. Oechsli to Vietnam and the plight of the country’s devastating rates of death and morbidity caused by accidental injuries.  This was the start of a long relationship between the Petersons and Mr Feeney’s foundation, The Atlantic Philanthropies.  After selling his huge duty-free business, Mr Chuck Feeney decided in 1982 to devote his wealth to the service of humanity. A champion of “Giving While Living”, Mr Feeney has long maintained that people of wealth should use it to better the world during their lifetimes.  Over its 37 years, the foundation invested over US$8 billion in creating opportunity and promote greater fairness and equity for people around the world. Because Atlantic’s vision was to address deeply rooted problems sooner rather than later, many of their grants were “big bets” designed to bring lasting improvements to people’s lives.

With preventable child injuries being one of those ‘orphan issues’, Ms Peterson and her husband then founded The Alliance for Safe Children (TASC) in 2002 following their departure from Vietnam. TASC is a not-for-profit organisation based in the US, with a mission to “serve as a global catalyst to address the child injury problem and a focal point for advocacy and fund-raising”.  Atlantic naturally became the seed funder for TASC and supported many of TASC’s injury prevention programs in 8 countries in Asia.

After permanently relocating to Australia, Ms Peterson rejoined the International House community as a member of Council, the governing body of IH, and soon was appointed Chair of Council.  The aim of the Council of International House is to ensure that the strategic and academic purpose of the college, the promotion of multiculturalism and student growth into global citizenship are achieved.  Along with this, it is the role of the council to oversee the allocation of scholarships to students, like that of the college’s newest scholarship, the Vi and Pete Peterson Scholarship. 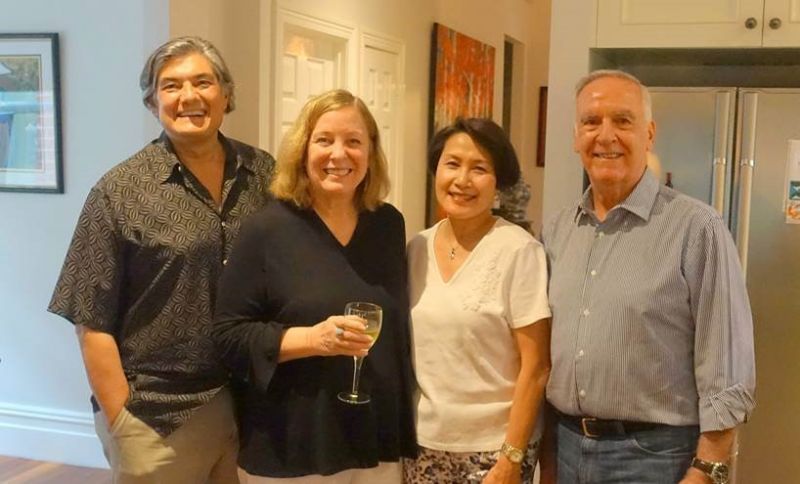 Picture: Chris and his wife Julie Ann with Vi and Pete at their residence.

Through her connection to both The Atlantic Philanthropies and its President and CEO, Mr Christopher G. Oechsli, Ms Peterson was the inspiration and spearhead behind the creation of this scholarship. Atlantic has made significant donations to the University of Melbourne in the past and during Mr Oechsli’s last visit to Australia in February 2020, Ms Peterson mentioned her passion for scholarships and her hopes for more being made available at the college. To her surprise, Mr Oecheli then advised her that the mission of International House is consistent with Mr Feeney’s historical interests in both student accommodation at universities and promotion of multicultural awareness.  Despite Atlantic having concluded all its grant activities and preparing to shut down its operation by the end of the year, he then suggested to her that he could still explore the possibility of developing a US$250,000 grant from the concluding balances of a special “Founding Chairman’s Fund” if he were to receive a proposal from IH.  Hence, the Vi and Pete Peterson Scholarship came to fruition; a A$387,000 donation for scholarships named affectionately after Ms Peterson and her husband and in honour of all of their achievements and efforts to provide the same opportunities to all.  It is up to the IH Council’s Education Committee to determine how the scholarship is allocated, based on academic merit, financial need and/or community contribution.

Regardless of what its allocation is based on, this scholarship will fulfil its purpose of providing an amazing opportunity to a well-deserving future student and effectuate Ms Vi Peterson’s drive and passion of realising potential and providing students with opportunities they may not have had access to otherwise; and this scholarship, along with the countless others offered by the college, will do just that for the future students of International House.